Investing in Idaho’s Transportation System Saves Money Down the Road

Investing in Idaho’s Transportation System Saves Money Down the Road 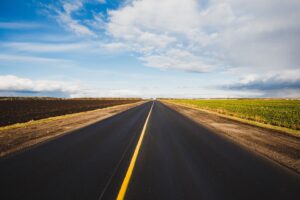 An extensive study of Idaho’s transportation system conducted by the Idaho Policy Institute in 2020 found that Idaho needs $241.8 million in revenue to restore and maintain current roads and bridges, each year. The study concludes, if such funding is not available and maintenance is deferred, then the figure compounds – making the funding requirements significantly larger in the future.

For an example of how costly deferring maintenance can be, let’s look at pavement preservation.

Research has shown that highway agencies with proper funding to maintain a strict pavement maintenance schedule will save substantial amounts of money down the road. Decades of supporting data have found that it is as much as 10 times cheaper to preserve pavement than to replace it. As shown on the Kendall Curve below, proper maintenance coupled with early renovations will maximize savings for highway agencies. 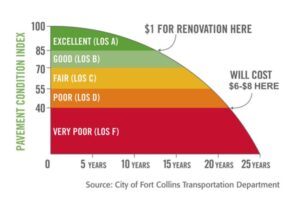 In this case, the goal is clear: focus on preserving pavement rather than allowing deterioration to dictate more substantial and expensive treatments later. However, it is imperative that highway agencies have enough revenue to complete routine maintenance and preservation projects without deferring projects to later years.

During the 2022 State of the State Address, Governor Little introduced his Leading Idaho plan, which includes a significant investment package for roads and bridges in the Gem State. Little’s proposal to rebuild and restore Idaho’s infrastructure will allow highway jurisdictions to get back to more cost-effective maintenance measures early on, which not only stretches a taxpayer’s dollar further but extends the useful life of roads and bridges.

Read more about pavement preservation and how it can help save for the future by downloading a copy of the IdaRoads Magazine and visiting page 17.